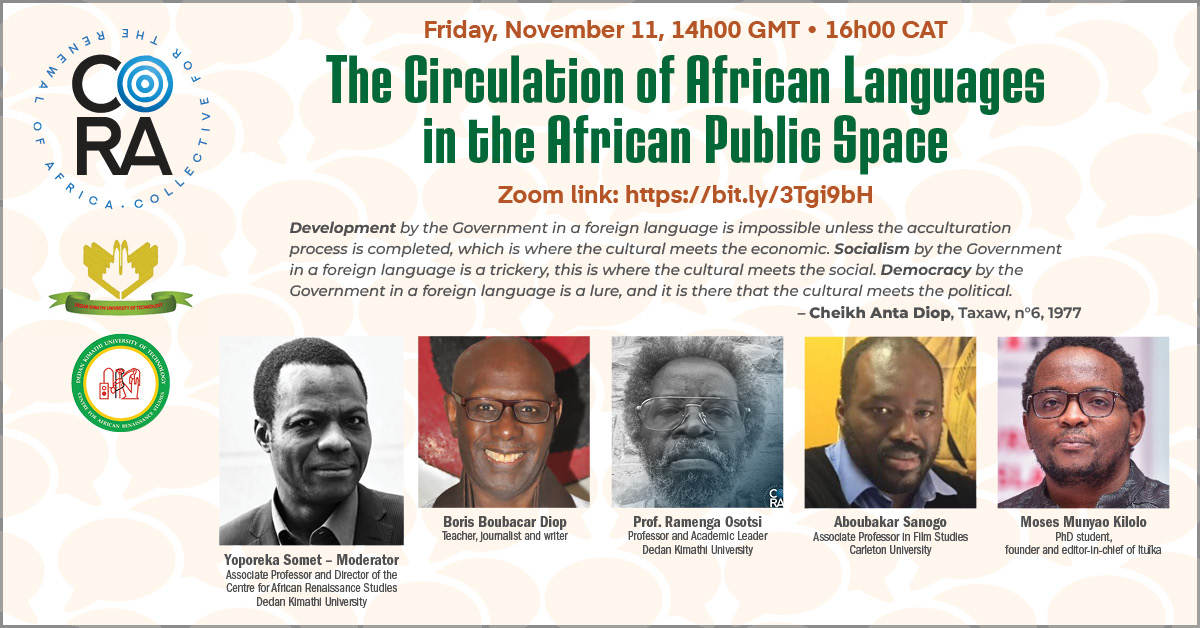 The circulation of African languages in the African public space “Development by the Government in a foreign language is impossible unless the acculturation process is completed, which is where the cultural meets the economic.

Socialism by the Government in a foreign language is a trickery, this is where the cultural meets the social.

Democracy by the Government in a foreign language is a lure, and it is there that the cultural meets the political.”

This webinar focuses on the circulation of African languages in the African public space. More than sixty years after the accession of African countries to independence, one fact is clear: in most countries on the African continent, the working languages used in the circles of power, administrations, parliaments, and institutions in charge of education and the production of knowledge are still largely those inherited from the European colonial administration: English, French, Spanish or Portuguese. Even if it is estimated that these foreign languages are mastered by a minority of the population, they nevertheless enjoy the status of official languages and are supposed to regulate the political, legal, cultural and economic life of the countries in question. As for the African languages, which are spoken by the majority of the population, they are, so to speak, relegated to the margins: in the streets, markets, informal sectors and the countryside of the deepest country…

How can we consider, under these conditions, any economic, social, cultural, intellectual, etc. development on a national scale if the great majority of the people concerned do not master the language in which the important affairs of the country are discussed? Is there not an obvious link between economic, social, cultural and intellectual growth and the language that carries (or not) this growth?

Fortunately, there are also examples on the continent where linguistic unity (around a national language) is a factor of progress: Ethiopia is an example, as well as the countries of the Maghreb, and to a certain extent, some countries of Eastern and Southern Africa: Tanzania, Kenya, Uganda, Rwanda, Burundi, and Zambia. In the latter countries, the language spoken by all the inhabitants is an African language: Kinyarwanda and Kirundi for Rwanda and Burundi and Kiswahili for the others (Kenya, Tanzania, Uganda, and Zambia).